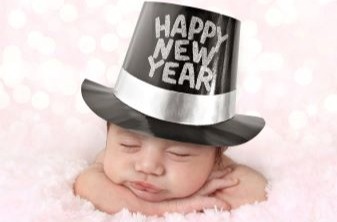 Ring in the New Year!

2022 may be remembered for inflation, rising interest rates, and geopolitical turmoil

Inflation was a dominant concern throughout the year. In January, the Consumer Price Index showed that prices were up 7.5 percent year-over-year. Inflation issues were exacerbated when Russia invaded Ukraine at the end of February.

“Despite weeks of buildup, Russia’s invasion of Ukraine on Feb. 24 was unexpected and sent shock waves through commodities markets still struggling with the after-effects of the pandemic…the price of Brent crude oil [rose] to $123 on March 8, up from $92 a barrel on Feb. 23…The war also upended grain markets. Ukraine and Russia both export masses of wheat plus other food, and prices leapt as the Black Sea, through which much grain gets dispatched, descended into a battle zone…However, the laws of economics worked, and higher prices did become the cure for high prices,” reported Simon Constable of Barron’s.

From March through December, the Federal Reserve aggressively tightened monetary policy in an effort to slow the economy and inflation. The Fed raised the federal funds rate seven times and lifted the effective federal funds rate from near zero to 4.33 percent. Despite the Fed’s efforts, inflation persisted as consumer spending, which is the primary driver of U.S. economic growth, proved resilient for much of the year. In November, consumer spending slowed significantly.

Will 2023 bring a recession or a soft landing?

The question that has been on everyone’s mind is whether the slowdown will become a recession. Opinions differ widely. In late December, economists participating in a Bloomberg poll said there was a 70 percent chance of recession in 2023. In contrast, economists at a major investment bank say the U.S. will experience a soft landing in 2023. A soft landing occurs when the economy slows, and inflation falls, without a recession.

The inverted U.S. Treasury yield curve tells its own story. The New York Federal Reserve wrote, “The yield curve – specifically, the [difference] between the interest rates on the ten-year Treasury note and the three-month Treasury bill – is a valuable forecasting tool. It is simple to use and significantly outperforms other financial and macroeconomic indicators in predicting recessions two to six quarters ahead.”

“2022 will likely be remembered as a year when conventional wisdom about a new market and new economy was destroyed, and investors once again learned that ‘it’s not different this time’…Investors were once again brought back to economic and financial reality, a reality where profits matter, interest rates can go up, inflation can rise, and geopolitical risks are real,” stated a source cited by Jack Denton of Barron’s.

OPTIMISM AND HOPE FOR THE NEW YEAR. As 2022 ended, many people shared what they anticipated in the new year. From a World Cup record to peak China, here are a few of the stories that caught our attention:

The beautiful game. “…the U.S. Women’s National Team will look to defend their 2019 [World Cup soccer] title at the tournament cohosted by Australia and New Zealand. The four-time World Cup champs…could become the first team in either the women’s or men’s game to win three successive World Cups,” reported Lisa Antonucci of NBC Sports.

The Great American Solar Eclipse. On October 14, “…the Moon will again pass directly between Earth and the Sun – but this time it will not quite completely cover the solar disk, instead turning it into a thin ‘ring of fire.’ This annular (Latin for ring-shaped) eclipse will be visible within a roughly 125-mile-wide path from Oregon to Texas and on into Mexico and northern South America,” reported the American Astronomical Society.

Healthcare advances. “According to reports, science seems on the threshold of unlocking the mysteries that could lead to cures or game-changing treatments for diabetes, Parkinson’s, HIV, many types of cancers and heart conditions, and more. When it comes to modern medicine, there’s reason to hope that 2023 will be the Year of Miracles,” wrote Gary Abernathy for the Washington Post.

A change in China’s influence. “Some time in April China’s population will be overtaken by India’s, at around 1.43 [billion]. With China’s population in decline, and its economy facing headwinds, expect much discussion of whether China has peaked,” wrote Tom Standage of The Economist.

Strength in optimism. “… conventional wisdom is likely to be wrong. That’s what makes me so hopeful and so eager for the future: the widespread doom and gloom. What good is pessimism? I used to think hope was a product of external facts, but the school of life has convinced me otherwise. Hope is a choice, strengthened through practice; not a reflection of light, but light itself,” wrote David Von Drehle for the Washington Post.

What are you looking forward to in 2023?

“We cannot direct the wind, but we can adjust the sails.”

* These views are those of Carson Coaching, not the presenting Representative, the Representative’s Broker/Dealer, or Registered Investment Advisor, and should not be construed as investment advice.

* Government bonds and Treasury Bills are guaranteed by the U.S. government as to the timely payment of principal and interest and, if held to maturity, offer a fixed rate of return and fixed principal value.  However, the value of fund shares is not guaranteed and will fluctuate.

* Corporate bonds are considered higher risk than government bonds but normally offer a higher yield and are subject to market, interest rate and credit risk as well as additional risks based on the quality of issuer coupon rate, price, yield, maturity, and redemption features.

* The Standard & Poor's 500 (S&P 500) is an unmanaged group of securities considered to be representative of the stock market in general. You cannot invest directly in this index.

* All indexes referenced are unmanaged. The volatility of indexes could be materially different from that of a client’s portfolio. Unmanaged index returns do not reflect fees, expenses, or sales charges. Index performance is not indicative of the performance of any investment. You cannot invest directly in an index.

* The Dow Jones Global ex-U.S. Index covers approximately 95% of the market capitalization of the 45 developed and emerging countries included in the Index.

* Gold represents the 3:00 p.m. (London time) gold price as reported by the London Bullion Market Association and is expressed in U.S. Dollars per fine troy ounce. The source for gold data is Federal Reserve Bank of St. Louis (FRED), https://fred.stlouisfed.org/series/GOLDPMGBD228NLBM.

* The Bloomberg Commodity Index is designed to be a highly liquid and diversified benchmark for the commodity futures market. The Index is composed of futures contracts on 19 physical commodities and was launched on July 14, 1998.

* The DJ Equity All REIT Total Return Index measures the total return performance of the equity subcategory of the Real Estate Investment Trust (REIT) industry as calculated by Dow Jones.

* The Dow Jones Industrial Average (DJIA), commonly known as “The Dow,” is an index representing 30 stock of companies maintained and reviewed by the editors of The Wall Street Journal.

* The NASDAQ Composite is an unmanaged index of securities traded on the NASDAQ system.

* International investing involves special risks such as currency fluctuation and political instability and may not be suitable for all investors. These risks are often heightened for investments in emerging markets.

* Yahoo! Finance is the source for any reference to the performance of an index between two specific periods.

* The risk of loss in trading commodities and futures can be substantial. You should therefore carefully consider whether such trading is suitable for you in light of your financial condition. The high degree of leverage is often obtainable in commodity trading and can work against you as well as for you.  The use of leverage can lead to large losses as well as gains.

* Opinions expressed are subject to change without notice and are not intended as investment advice or to predict future performance.

* Economic forecasts set forth may not develop as predicted and there can be no guarantee that strategies promoted will be successful.

* Past performance does not guarantee future results. Investing involves risk, including loss of principal.

* The foregoing information has been obtained from sources considered to be reliable, but we do not guarantee it is accurate or complete.

* Asset allocation does not ensure a profit or protect against a loss.

* Consult your financial professional before making any investment decision.