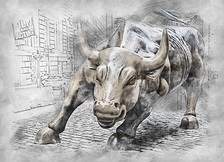 Reasons to be Bullish

The stimulus auction continued last week. Early on Sunday, The New York Times reported, “Lawmakers are on the brink of agreement on a $900 billion compromise relief bill after breaking through an impasse late Saturday night, with votes on final legislation expected to unfold as early as Sunday afternoon and very likely just hours before the government is set to run out of funding.”

Among other items, policymakers’ plans to deliver new stimulus and fund the government is expected to include:

The Federal Reserve met last week too. It affirmed it will continue to hold rates near zero and purchase $120 billion of bonds every month. Nalak Das reported:

“A low interest rate will reduce the cost of capital for businesses, while consumers will have a lesser propensity to save due to a low deposit rate. Therefore, higher spending by businesses and consumers is likely to bolster the overall economy and raise stock prices. In its latest projection, the Fed forecast the GDP [*] to decline 2.4 percent in 2020, reflecting an improvement over September's projection of a decline of 3.7 percent.”

*Gross Domestic Product is the value of all goods and services produced in the nation.

IF YOU CAN KEEP YOUR HEAD WHEN EVERYONE AROUND YOU IS BULLISH... (Apologies to Rudyard Kipling for paraphrasing his poem, If.) Tis the season to assess where we’ve been and where we might be going. Last week, various research companies and publications explored investor confidence and expectations. Here is a brief review of the commentary being offered:

“The Great Reflation Trade of 2021: Most Optimistic Survey in its Six-Year History.” Absolute Strategy Research published its survey of probabilities, which asked chief investment officers, asset allocators, economists, and multi-asset strategists to describe their 12-month outlook for financial markets. The results the most optimistic result in six years with 81 percent of those participating saying they were bullish.

“Froth or fundamentals? What explains investors’ enthusiasm for risky assets?” The Economist wrote, “…equities have become more attractive than bonds – at first probably because bond yields fell so quickly, boosting the relative appeal of stocks, but lately thanks to the vaccine heralding the return of growth and profits, which a modest increase in yields has not offset. The rise in share prices alone, then, is probably not enough to indicate a mania…"

“The S&P 500 Could Gain Another 10% Next Year, Experts Say.” Barron’s cover article sported this optimistic headline and confidently reported, “This year brought heartache to Main Street but joy to Wall Street. Next year, if vaccines vanquish the coronavirus, as expected, and the economy rebounds, it could be a time of celebration for both.”

“Gleeful consensus on equities sparks concern over ‘groupthink’” Financial Time’s Naomi Rovnick spoke with the head of behavioral finance at a British consulting firm about exceptional levels of bullishness. He said, “‘This year has been dominated by one story, which is COVID, and this is a very new and unusual situation that financial forecasters have no pre-existing framework to use to form their views…It is likely they are cleaving to consensus more than they otherwise would.’”

No matter what you read about what’s to come, the important thing to remember is this: “No one can predict the markets. The overwhelming evidence from decades of academic research is that nobody can reliably and accurately forecast what the stock market will do,” reported Jeff Sommer of The New York Times.

“Optimism is the faith that leads to achievement. Nothing can be done without hope and confidence.”