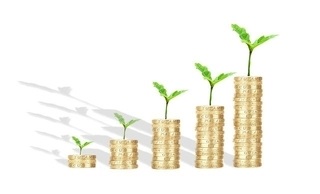 Are those green shoots?

In economic terms, green shoots are signs of improvement. If you were paying close attention, you might have seen some in economic data released last week.

They weren’t apparent in the Bureau of Labor Statistics report on the United States economy. Gross domestic product (GDP), which is the value of all goods and services produced in our country, shrank by 5 percent during the first quarter of 2020. The contraction reflected lower spending by Americans and American businesses due to COVID-19. The Congressional Budget Office (CBO) estimated:

“…from March 21 to March 31, when many social distancing measures were in place, spending may have been down by almost 28 percent as a result of the pandemic; spending on accommodations and restaurants declined by 60 percent to 80 percent; and spending for some goods (such as clothing) dropped by similar amounts.”

Spoiler alert: The numbers for the second quarter are expected to be far worse. However, economic growth is expected to bounce as consumer spending, which accounts for two-thirds of GDP, resumes.

The green shoots were found in unemployment. As businesses reopened and shelter-in-place orders eased, the U.S. unemployment rate dropped to 14.5 percent during the week of May 16 from 17.1 percent the previous week, according to the Department of Labor.

Green shoots were also sprouting from the University of Michigan’s May Consumer Sentiment Survey, which reported “…a growing number of consumers expected the economy to improve from its recent standstill…” The Index of Consumer Sentiment ticked higher from April to May.

The United States experienced highs and lows last week. A NASA public-private partnership launched the Dragon capsule into orbit. Its astronauts are headed for the International Space Station. Meanwhile, down on Earth, protests for justice in the death of George Floyd devolved into rioting.

FYI: IT'S JUNE!    One side effect of COVID-19 quarantine is losing track of days. When routines are disrupted and recurring activities that distinguish one day from the next are discontinued, it can be difficult to know whether it is Monday or Thursday.

Fortunately, the United States has enough national holidays to clearly delineate one day from the next. Here is a list of some June holidays to help you keep track of days:

June 6: D-Day – remembering the day Allied troops landed on the beaches of Normandy

June 14: National Flag Day and the Birthday of the U.S. Army

June 20: Summer Solstice – the start of summer in the Northern Hemisphere

June 30: Social Media Day (As if that were not every day!)

By the end of June, we should be on our way to a new normal and able to use the coronavirus lockdown as a point of reference for tracking events.

“Whenever any American's life is taken by another American unnecessarily – whether it is done in the name of the law or in the defiance of law, by one man or a gang, in cold blood or in passion, in an attack of violence or in response to violence – whenever we tear at the fabric of life which another man has painfully and clumsily woven for himself and his children, the whole nation is degraded.”