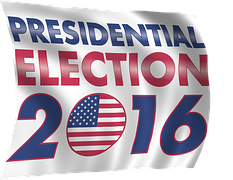 During July 2016, Pew Research reported almost 60 percent of Americans were suffering from election fatigue. They weren't uninterested in the election. They were just worn out by never-ending news coverage that focused on candidates' comments, personal lives, and standing in the polls rather than their moral character, experience, and stance on issues.

Last week, U.S. election news overshadowed positive economic data causing U.S. stocks to lose value as investors shifted assets into safe havens. Early on Friday, the Bureau of Economic Analysis released gross domestic product data, which reflects the value of all goods and services produced in the United States during the period. Initial estimates suggest the U.S. economy grew at an annual rate of 2.9 percent in the third quarter of 2016, an improvement on second quarter's 1.4 percent growth. Consumer spending continued to be the primary driver of growth in the United States.

Markets moved higher on the news, only to retreat when the Federal Bureau of Investigation said it is looking at new evidence in the Clinton email investigation. Financial Times wrote:

"Mr. Trump, Mrs. Clinton's Republican challenger, had fallen dramatically in the polls in recent weeks: market strategists said this had eased uncertainty given the real estate businessman's controversial views on trade and immigration. However, the news of the new probe - just 11 days before the presidential election - has sparked fresh tumult."

Financial Times indicated the CBOE Volatility Index (VIX), a.k.a. the fear index, moved higher on Friday. The index measures the anticipated volatility of the Standard & Poor's 500 Index over the next 30 days. In addition, U.S. Treasury yields, which had been increasing on rumors the European Central Bank might begin to taper its quantitative easing program, dipped lower.

The next few weeks are likely to be bumpy for investors. During times like these, it's critical to keep your eye on your long-term financial objectives. We've weathered volatile times before, and we will get through them again.

Ooooh! Some States' estate taxes are scary! Most Americans aren't too concerned about federal estate taxes. After all, 99.8 percent won't have estates large enough to be subject to the tax. For 2016, the estate tax threshold is $5.45 million (double that amount for a married couple) and it is expected to be $5.49 million in 2017 (barring any changes to the tax code).

At the state level, it's a different story. Kiplinger's explained:

"However, state estate taxes, which kick in for estates valued at only $1.5 million or less in several states, could take a big bite out of your legacy. Your home and retirement accounts will be counted when your estate is valued for tax purposes, and proceeds from your life insurance could be counted, too, depending on how the policy is owned and who gets the money."

The Tax Foundation reports, in all, 15 states and the District of Columbia have estate taxes. They included:

While not all have estate taxes, Iowa, Kentucky, Maryland, Nebraska, New Jersey, and Pennsylvania all have inheritance taxes. If you haven't given much thought to estate planning, contact us to possibly help you find ways to minimize the taxes your estate and your heirs may owe.

"Success is not final; failure is not fatal: It is the courage to continue that counts."