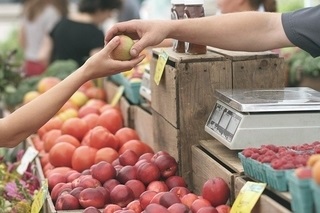 What is the most important driver of economic growth in the United States?

The most common way to measure economic output is Gross Domestic Product or GDP. It’s the value of all goods and services produced in our country over a specific period of time. GDP is a combination of the following:

In June, U.S. GDP was almost $23 trillion, reported the Bureau of Economic Analysis.

One trillion is a difficult number to comprehend. Jerry Pacheco of KRWG explained the amount like this, “If you laid one billion dollars side by side like tile, they would cover about four square miles. A trillion dollars laid out the same way would cover approximately 3,992 miles, or 1,000 square miles larger than the states of Rhode Island and Delaware combined.”

U.S. GDP grew by 6.5 percent annualized in the second quarter of 2021. Consumer spending was up 7.8 percent, while government and business spending were down, along with net exports. It’s not unusual for net exports to decline because the U.S. imports more than we export. Overall, consumer spending accounted for almost 69 percent of the economy. So, the answer to the initial question is that consumer spending is the most important driver of economic growth in the United States.

Consumers tend to spend when they feel confident. Last week, we learned that consumers are feeling a lot less confident than they were in July. Richard Curtin of the University of Michigan Consumer Sentiment Survey reported:

“Consumers reported a stunning loss of confidence in the first half of August. The Consumer Sentiment Index fell by 13.5% from July…The losses in early August were widespread across income, age and education subgroups and observed across all regions. Moreover, the loses covered all aspects of the economy, from personal finances to prospects for the economy, including inflation and unemployment. There is little doubt that the pandemic's resurgence due to the Delta variant has been met with a mixture of reason and emotion.

The seven-day moving average of new U.S. COVID-19 cases has been rising since early July, reported Our World in Data.

ALL EYES ON DIGITAL CURRENCY…It appears everyone is talking about digital currencies these days. Among the topics being discussed are:

In July, Federal Reserve Chair Jerome Powell confirmed that he is undecided about whether the Federal Reserve should issue a CBDC, reported Ann Saphir and Dan Burns of Reuters. He indicated that digital currencies have failed to become a widely accepted means of payment, although a CBDC would eliminate the need for private digital money, especially digital currencies that claim to be pegged to the U.S. dollar. Chris Matthews of MarketWatch explained:

“Critics of stablecoins say they pose significant risks to financial stability, especially after it was revealed that some of these dollar-pegged tokens are not backed by actual U.S. dollars, but a combination of riskier assets…[Chair] Powell said in a congressional hearing that regulators need to apply rules to stablecoins that are similar to those that govern bank deposits and money market mutual funds.”

Congress and the Securities and Exchange Commission (SEC) are both considering ways to regulate digital currency. The pending bipartisan infrastructure bill includes tax-reporting requirements for cryptocurrency brokers. If the bill passes without changes, digital currency sales would be reported to the IRS in much the same way that stock sales are. The change is expected to generate about $28 billion in taxes over a decade to help pay for infrastructure, reported Marcy Gordon of AP News.

“As new technologies come along, we need to be sure we’re achieving our core public policy goals. In finance, that’s about protecting investors and consumers, guarding against illicit activity, and ensuring financial stability… at our core, we’re about investor protection. If you want to invest in a digital, scarce, speculative store of value, that’s fine. Good-faith actors have been speculating on the value of gold and silver for thousands of years, I believe we have a crypto market now where many tokens may be unregistered securities, without required disclosures or market oversight. This leaves prices open to manipulation. This leaves investors vulnerable.”

It seems that changes are coming for the cryptocurrency market.

“Humans are allergic to change. They love to say, ‘We've always done it this way.’ I try to fight that. That's why I have a clock on my wall that runs counter-clockwise.”