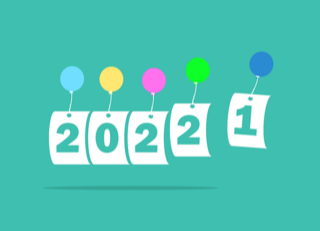 Everything seemed to shoot higher – from COVID-19 cases and vaccinations to economic growth and global stock markets. Everything except for optimism. As the year came to an end, a CBS News poll found that 40 percent of Americans felt 2021 was mostly filled with sadness, although almost three out of four people polled said they were hopeful for 2022.

Vaccinations took off. At the start of the year, very few people were vaccinated against COVID-19. Despite issues with vaccine reluctance and availability, by the end of the year more than 58 percent of the world’s population had received at least one dose of a COVID-19 vaccine.

United States’ economic growth was stronger than it has been in decades. In December, The Conference Board estimated the U.S. economy grew by 6.5 percent annualized in the fourth quarter of 2021, and 5.6 percent over the full year. That’s the strongest growth in decades, according to Ben Levisohn of Barron’s. The publication reported the lesson of the last century is, “Don’t underestimate the resilience of the U.S. economy.”

Inflation rose faster than it has in decades. Consumer prices increased at the fastest pace since 1982. By December, prices were up almost 7 percent for the year in the U.S., according to The Economist. As rents and wages increased, the Federal Reserve changed the language it used when discussing inflation, removing the word “transitory.” Some economists say inflation will subside in 2022, while others believe it will be more enduring, according to a report from Goldman Sachs.

Consumer sentiment declined and then rose in December. Overall, consumers were less optimistic during 2021, largely because of inflation. About 25 percent of households said inflation was eroding their standard of living.

In December, however, optimism moved sharply higher “…primarily due to significant gains among households with incomes in the bottom third of the distribution. Indeed, the bottom third expected their incomes to rise during the year ahead by 2.8%, up from 1.8% last December,” reported Richard Curtin, the University of Michigan’s Surveys of Consumers chief economist. That’s the biggest gain in 22 years.

The Federal Reserve took a hawkish turn. As inflation persisted, the Fed decided to accelerate monetary policy tightening by tapering bond purchases more quickly than expected. In December, 12 of the 18 Federal Open Market Committee members indicated they anticipate at least three rate hikes in 2022. The increases would lift the Fed funds rate from zero to 0.25 percent to 0.75 to 1.0 percent.

China cracked down on “capitalist excesses.” “More than $1trn was wiped off the collective market capitalization of some of the world’s largest internet groups...Entire business models – online tutoring, for example – were laid waste. Investors needed to hear that an end was in sight. But on August 8th the Communist Party issued a five-year blueprint aimed at reshaping China’s tech industry – confirming to even the most optimistic industry watchers that the abrasive changes would continue well into 2022,” explained The Economist.

Finding income in the bond market was challenging. “Emerging-market bonds were supposed to be dragged down this year as central banks moved toward withdrawing stimulus. Instead, the best-performing global debt was all from developing nations…South Africa, China, Indonesia, India and Croatia topped the rankings of 46 markets around the world in 2021,” reported Lilian Karunungan and Masaki Kondo of Bloomberg.

It has been an honor to work with you during 2021. We look forward to seeing you in the new year!

THE LATEST FASHION: RESALE AND REUSE...If there was a spectrum that reflected the value and longevity of everything we owned, consumables (coffee and cell phones) might be at one end, durables (automobiles and appliances) in the middle, and items with enduring value (homes and collectibles) on the other end, according to The Economist.

Clothing might belong on different parts of the spectrum. Everyday socks might be on one end while Audrey Hepburn’s little black dress from Breakfast at Tiffany’s and Neil Armstrong’s Apollo 11 spacesuit ranged toward the other end.

Currently, people spend less on clothes, overall, but buy more than they once did. Often, items are worn a few times and then discarded. As a result, the fashion industry has a sustainability problem. The Economist reported:

“…industry studies reckon that clothing manufacture and distribution account for between 2% and 8% of global carbon emissions. The fashion industry probably emits more carbon than aviation (3% of emissions) or shipping (2%).”

With consumers prioritizing sustainability, fashion has begun to change. More people are cleaning out their closets and selling clothing online, according to the 2021 Resale Report. As a result, the resale clothing marketplace is expected to double, reaching $77 billion, during the next five years.

That may be the tip of the iceberg. Thirty-six billion pieces of clothing are thrown out by Americans each year, and estimates suggest that 95 percent could be recycled or reused.

Smiles from the threshold of the year to come,

Whispering ‘it will be happier’...”